Bigg Boss Tamil hosted by Vijay Tv got a super duper hit in Tamilnadu. Due to that the team planned to host Bigg Boss Tamil 2. Compared with part 1 the upcoming part 2 will be more entertaining because of two contestants. 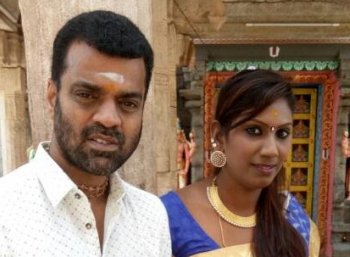 Those are Viajay TV artist Balaji and his wife Nithya. Balaji (known as Thadi Balaji) is well known for “Kalaka povadhu yaar” and “Boys vs girls” hosted by vijay tv. The love with Nithya becomes successful marriage. Through Balaji, Nithya also particitpated in some vijay tv shows. At the time of “Jodi” show shooting (in which season TR and actress Sadha been judge) the problem between Balaji and Nithya revealed to the others. After few days, Nithya filed a complaint against Balaji. They both seek divorce and thier case is happeing in Family court. In this situation, Simbu tried to solve problems between them, but it is no use. Nithya lives with her daughter Boshika. They both were not seen each other for few years. However, they both are participating in Bigg Boss Tamil season 2. Balaji has no issues with this. In the starting, Nithya has not agreed to the show. But Vijay Tv has convinced Nithya to join. Whatever, after few year seperation, the couples will going to live in the same house for 100 days. Who knows, they may become couples after 100 days…! Bigg Boss Fans are eagerly waiting to see the couples reaction in the house.