2017 TVS Jupiter Classic Edition: Everything You Need To Know

TVS Motors is the third largest two-wheeler manufacturer in India and gives a tough competition to the industry stalwarts like Hero MotoCorp, Honda, etc. It is pretty active in the two-wheeler segment – both scooter and motorcycle, and working hard to keep its Indian portfolio competitive. In the scooter segment, TVS has two major offerings – Scooty and Jupiter. While the Scooty is mainly targeted to the female consumers with a peppy look, the Jupiter is targeted for the male segment with a bold design. 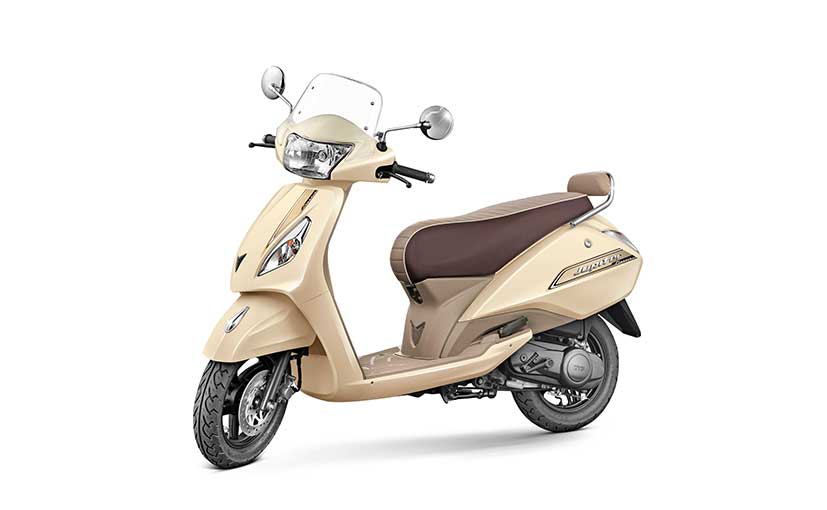 TVS Jupiter was originally launched in 2013. After doing a successful business for four years, the company has introduced a Classic edition in India, which is like a luxurious form of the standard scooter. Launched just a couple of months back, the TVS Jupiter Classic Edition has already garnered quite a good popularity.

The TVS Jupiter Classic Edition comes with a host of changes and upgradations over the standard model. Read on and find out everything that you need to know about the new edition of the Jupiter. 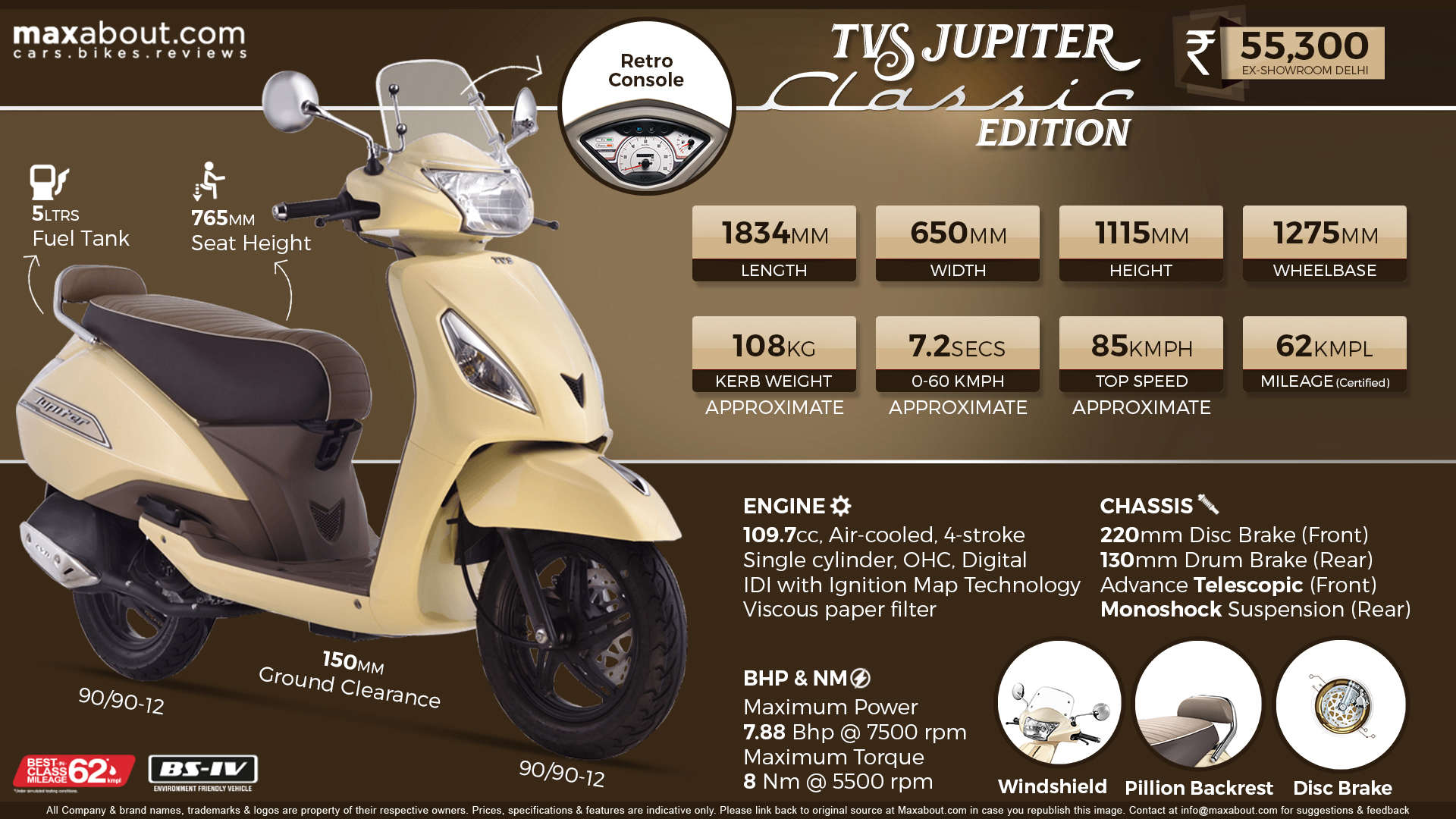 The TVS Jupiter Classic is based on the regular Jupiter but there are quite a few design changes that give the two-wheeler a more retro and classic look. It gets a new classic decal that includes a Sunlit Ivory colour body.

Windshield and other design enhancements:

There are some more physical additions that include new windshield over the headlamp, chrome-garnished rear view mirrors (now round in shape) and a redesigned backrest and cushioned grab rails.

The design is more on the bullish than what we have seen in the standard TVS Jupiter, It gets a lot of edgy curves and bends all across the body. Starting from the front section, even the wheel cover is curved and hosts some character lines on it. It, almost completely, leaves behind the regular rounded design of the Jupiter (which was quite similar to the Honda Aviator and Activa). The seat has a more premium touch to it. It is covered with dual tone covers. 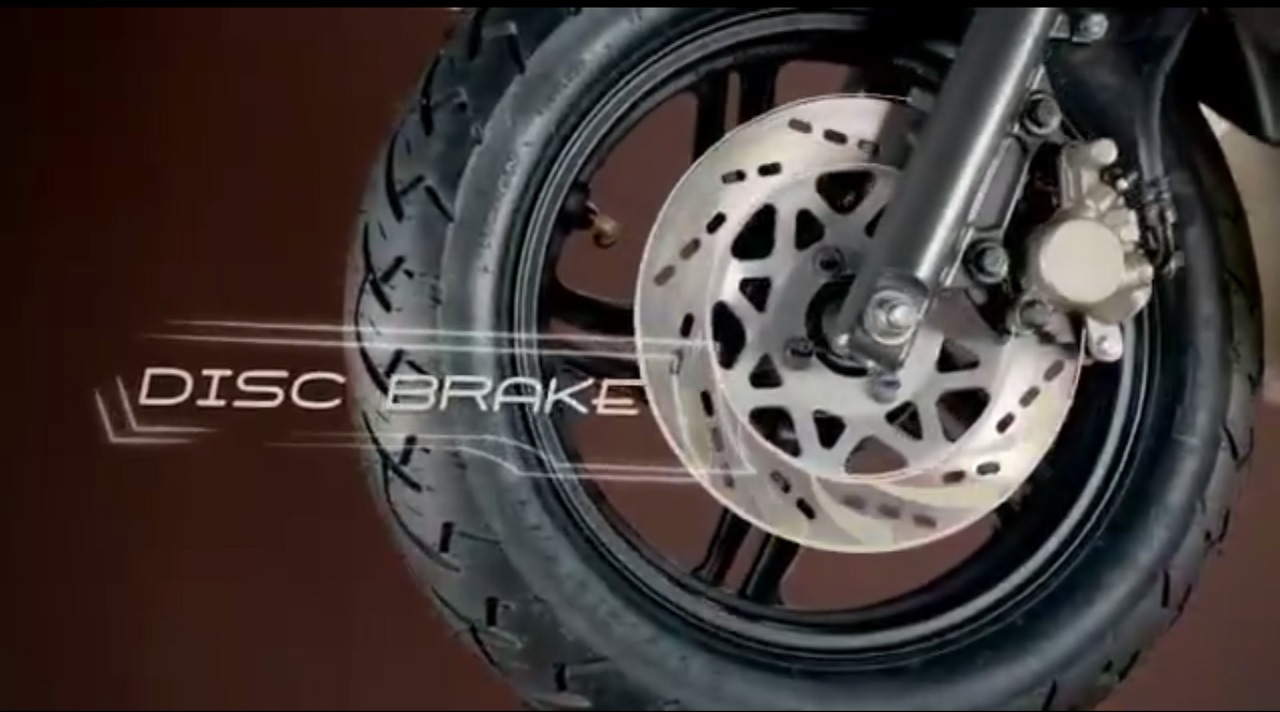 Moreover, it gets disc brake on the front 12-inch alloy wheels, while the standard variant of the Jupiter does not have a disc brake up front.

The new generation of the Jupiter continues to feature the company’s patented Econometer, which consists of two power modes – Eco and Power. The scooter becomes much more fuel efficient in the Eco mode while keeping the power in check.

A lot of colours:

The newly launched TVS Jupiter Classic Edition competes with a more premium range of scooters. Since it leaves behind the rounded shape, it looks way more superior than the Honda Activa and falls under the league of Yamaha RayZR and Hero Maestro Edge. However, the rounded rear view mirrors with chrome garnishing and the rear grab rails with backrest cushion make it look alike with the Piaggio Vespa, classic and retro.

TVS Jupiter has always been considered as a good choice among scooters mainly because it was extremely feature-rich and efficient right from the time it was launched. However, the production genius (considering the 2013 scooter market in India) couldn’t replicate the same in the sale number. Though it was high in demand, it was always inferior to the Honda Activa on the sales chart.

Having said that, the new 2017 TVS Jupiter Classic Edition has what it takes to outrun any other scooter on its day. More than anything else that would have mattered, the new Jupiter is stylish. However, by stylish I mean, it is attractive and not fancy. It isn’t edgy as the Maestro but is an epitome of retro-styling.

Hence, finally, we get something to cheer about, something that could match up to the design language of the Piaggio Vespa.

10
72
FacebookTwitter
10 shares, 72 points
Yatin Kumar is a professional wordsmith with 4+ years of experience in Content writing and Editing in automotive industry. He possesses excellent skills in Creative Writing, Corporate Communication, Digital Marketing, Public Relations, Advertising and Management. His aim is to lead the path of growth and learn new ways to explore every possible talent.