“Tri Color is a piece of silk for which hundreds...

In the Newshour debate with Arnab Goswami regarding the announcement of the HRD Ministry to hoist a Tri-color Flags in the Central-Funded Universities, Maj Gen Gagandeep Bakshi can’t hold his . Imankalyan Lahiri, Prof of Jadavpur University, strongly opposes the HRD Ministry’s order by saying it violates with autonomous nature of the University. JDU Gen Secy Ajay Alok and Shabnam Lone supported his viewpoint and questioned the timing of the announcement.

Maj Gen Bakshi, who was also present in the debate, was astonished by the arguments of  these people. He said, “Tri Color is a piece of silk for which hundreds and thousands of soldiers have died to see it fluttering”.  He can’t hold his emotions and broke into tears in front of the camera. Later, Anchor Arnab tried to console him. Smirti Irani, The HRD Misnister, who was watching the show called the studio and spoke to GD Bakshi.

She said, “Tragedy of my nation today, that I see tears in eyes of a brave soldier like you”. “We are grateful for your sacrifices and services. Under that flag everyday, knowingly, unknowingly know this we shall be grateful forever.” 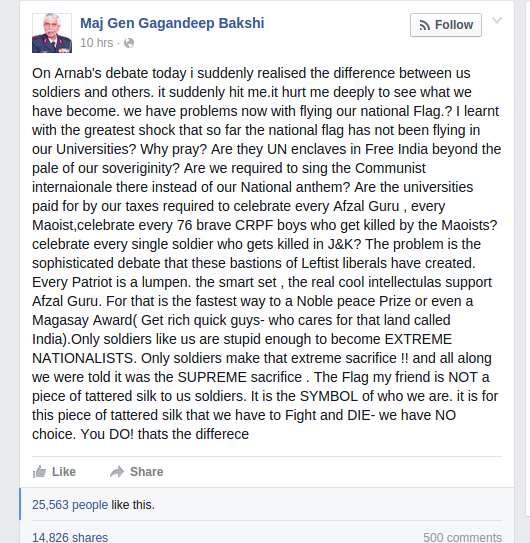 27
118
FacebookTwitter
27 shares, 118 points
Nirmalya has done his post graduate in business administration and now working as digital marketing executive in a US based firm. He loves to share the trending news and incidents with his readers. Follow him in Facebook or Twitter.